Siracusa is a jewel to discover, those who have underestimated the personality of this city has always regretted having done so, it would be recommended a long weekend to know it in all its many facets, but if you can not spend so much time to visit it, we will sew the visit on you, personalizing your tour!

Siracusa was most powerful city in the Greek world after Athens. Established as a colony of Corinth in the 8th century BCE, Siracusa eventually came to dominate the central Mediterranean. She fought Carthage to a draw and crushed Athens, whose “Siracusan Expedition” of the late 5th century, told so poignantly by Thucydides, ended the first Golden Age of Western Civilization in the harbor of Syracuse.
Together we can walk the matchless island-peninsula of Ortigia, redolent of ancient Greek myth and history, visit one of the two greatest Greek theaters in the world, an altar the length of two football fields, temples turned into cathedrals, and a cavern quarried by ancient war prisoners large enough to fit a cathedral. We’ll tell you stories of Dionysius the Great, Plato, Archimedes, Theocritus, Cicero, wonders ancient and modern.

Siracusa was a important center of Jewish life in late classical through early medieval Mediterranean, following the first disapora. We’ll spend a few hours touring the ancient Jewish quarter including a visit a ritual mikveh bath (hewn 30 feet into bedrock), the best preserved pre-modern mikveh anywhere.
Siracusa today is a Roman Catholic town, home of Santa Lucia. Her festivals (December 13-20, May 7) are marked with beautiful parades. Together we will visit the Siracusan catacombs, the largest in Italy outside of Rome, a chamber where St. Paul is said to have met with early Christians, more than one Norman church, and the medieval Church of Santa Lucia outside the walls.

Siracusa has never taken kindly to foreign invaders: her citizens assassinated a Byzantine Emperor naked in the public baths, defied the Arabs for fifty years, held off the Normans for thirty-five, and massacred the French. Twice. But under 17th century Spanish rule, even as the peasants in the countryside suffered under terrible oppression, Sicilian cities like Siracusa bloomed with splendid buildings of the aristocracy. A massive earthquake in 1693 forced the Spanish to rebuild the historic center of Siracusa, the island of Ortigia, which now is crowded with massive Baroque palaces overlooking twisting medieval streets. Colorful laundry and flowers adorn balconies and stylish boutiques sit beside tiny shops where master woodworkers and puppet makers labour at their craft.
The heart of Christian Siracusa is the Piazza Duomo, where prehistoric Sikel altars lie under a Temple to Athena, whose original columns still embrace what became a Christian church become a 9th century mosque, become a medieval then baroque cathedral. This history makes Piazza Duomo the site of longest continuous worship in world.
Inside the cathedral deep within under the magnificent juxtaposition of ancient temple and Spanish baroque is where to tell the story of Santa Lucia, martyred by the Romans, while visiting her arm.  Next door is the medieval Archbishop’s Library.
One can visit the cathedral and discuss the complex history while enjoying a coffee or granita (traditional lemon-ice treat) in a cafe looking at its celebrated Baroque facade. At dusk the square is transformed into a swirl of nightlife, as locals fill outdoor restaurants and promenade in their best attire in the sea air.
We could have lived anywhere in Siracusa, for that matter anywhere in Sicily, for that matter anywhere in Italy, for that matter anywhere. We chose Ortigia, in old Siracusa, in old Sicily. Come and let us show you why.

In the company of Damiano gastronomic critic or Alessia local chef, you will go around the street market of Ortigia, to discover the best products of Sicilian food and wine, taste and drink, enjoing, in their company. Then accompanied by a guide of our team you can visit the city for as long as you want, we will sew on you the walking tour, you are on vacation, we do not want you to stress but appreciate all the facets of Syracuse. Visit cooking experience 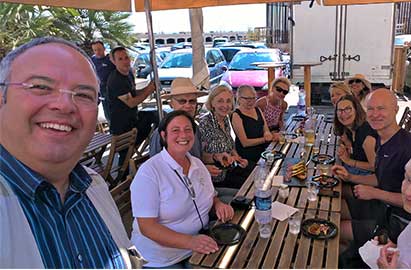